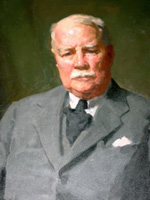 Robert Barr Smith (1824-1915) was born in Lochwinnoch, Renfrewshire, Scotland, and emigrated to Victoria in 1854. By 1855 he had relocated to Adelaide, South Australia, and became a partner in the business Elder & Co. In 1856 Robert Barr Smith married Thomas Elder's sister Joanna and by 1863 he and Thomas Elder were the only two partners in Elder Smith and Co., a highly successful business that included mining, pastoral leases and steamships in its portfolio.

Thomas Elder (1818-1897) emigrated from Scotland to South Australia in 1854 to jointly manage with his brother George the family firm founded in1840 by their elder brother Alexander.

Robert Barr Smith and Sir Thomas Elder were renowned for their philanthropy, donating generous sums to a wide array of organisations. The University of Adelaide was particularly well-served, receiving amongst other donations £9000 toward the establishment of its library. His son, Thomas Elder Barr Smith (1863-1941), together with other family members, donated £11,000 towards the endowment of the Barr Smith Library. An additional donation of £20,000 in 1928 was made to enable the erection of the new library building which is now known as the Barr Smith Reading Room.

Sir Thomas Elder's initial gift of £20,000 in 1874 was used to endow Chairs of Mathematics and Natural Science, while further gift in 1883 established the Elder Professorship of Music. The University of Adelaide was the largest beneficiary of Elder's estate, enabling the building of Elder Hall and the establishment of the Elder Conservatorium of Music .

A listing of the Barr Smith Family papers can be found on our website: MSS 0170

Collections in this community